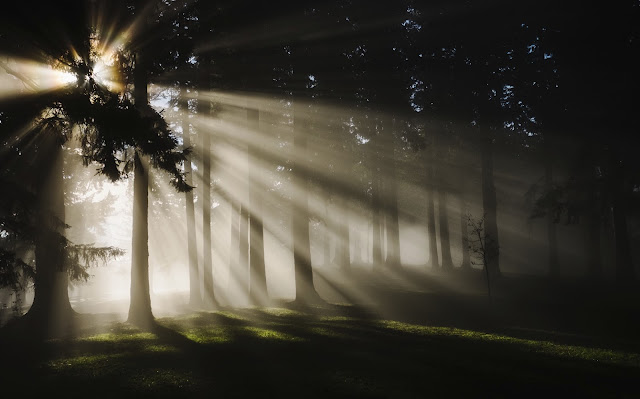 Once was lost, a daughter of God,
Wandering down a long path.
To a dark, scary and lonely place,
Where she didn’t know how to get back.

The darkness beckoned and called to her,
Promising comfort and fun.
But once she partook of the forbidden fruit,
She was left feeling empty and numb.

Bound by shadows in the dark one’s lair,
Where tempests unceasingly tossed.
She’d given up hope of freedom,
And felt eternally lost.

Then at the point of utter abandon,
To the grasp of the dark one’s grip.
She saw a small glimmer of light in the distance,
And the glow of hope was lit.

But the dark one would not have this light in his lair,
That threatened to release his hold.
For he’d worked with fury to ensnare her soul;
To keep her bound and cold.

He knew, however, that the light was Grace,
And he had aught fortune to test.
So rather than battle Grace head on,
He did what he’d mastered best.

“Let the seduction begin,” he thought,
As he moved in close to his prey.
And in her ear he quietly whispered:
“You will not see freedom this day.”

She looked again in the distance,
As fearful curiosity consumed her.
She observed a distant beautiful radiance,
Filling the dark and inky sphere.

“What is this?” she thought as the light grew closer:
“Is it really who I think it might be?”
“My Savior clothed in all His Glory,
Come down here to rescue me?”

Realizing how bound she was,
By the dark one's sticky grip.
She felt exhausted, suffocated and smothered,
Emotionally and spiritually stripped.

She longed for the touch of Grace’s light,
To be welcomed into His presence.
So she looked toward Him and took one step,
Regardless of the consequences.

Approaching Him with timid steps,
She expected to beg and plead,
For acceptance back in to His fold;
Submissive, on bended knee.

But then He gently spoke her name,
And her despair began to melt.
Her Spirit soared with recognition,
His love for her she felt.
“Oh my sister, how I have missed you,
From the moment you went away.
I have been searching everywhere,
Over mountain, canyon and pathway.”

So tender were His words to her,
So tender was His care.
No hint of accusatory reprimand,
Only deep concern for her welfare.

He knelt before her and looked in her eyes,
Asking: “May I tend your pain?”
Embarrassed she shied away from Him,
Afraid to show her stains.

“I am the great physician,” He said,
“Please do not be afraid.”
“I want to heal you whole again,”
“I can, with the price I have paid.”

She listened to His promise,
Believing every word He said,
And surrendered to His graciousness;
Allowing His healing to spread.

But he knew he had no power,
Over the Lord the Almighty Omniscient.
So he stood in his own shadows,
Incapacitated and silent.

Looking to her Savior inquisitively,
She asked: “Which way do you think I should go?”
And with radiating warmth in His eyes,
He said: "This way, I know."

She is eternally grateful,
to Her Brother, her Lord, her King.
For His perfectly undying love for her;
For the rescue He did bring.

The price He paid for her was high,
To save her helpless soul.
But one thing only He asks in return;
To love Him, pure, and whole.

So this she does wholeheartedly,
With bravery, heart and vigor.
To keep diligent sight of Him,
And return with Him to Father.