The Shackles of Expectation 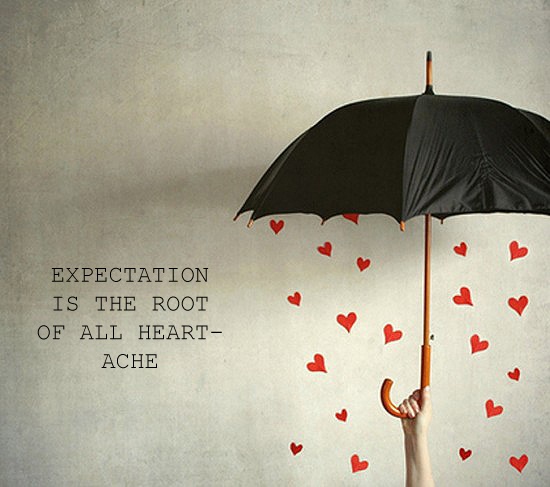 I originally wrote about a recent painful experience I had with my Stake President, here.

Written as an 'anonymous' letter, I signed it "A healing daughter of God," thinking no one would ever identify the author as me.

Pretty much everyone knew it was me. But I didn't really care. Even though it was deeply personal and I still bore scars from the experience, I needed to share it.

And I'm so glad I did. It helped me heal in so many ways. I felt as though I truly had given it away because I no longer thought about it, and no longer felt the sting of pain associated with it. I can't say I necessarily trusted my Stake President anymore, but I felt as if I'd forgiven him. I felt as if I'd let it go and held no ill will toward him.

It was Stake Conference, and as with all of them, I struggled to find the desire to attend. But late the previous night I felt an overwhelming sense that we really needed to be there.

And so we went.

Two personal and emotional conflicts happened that day that have since stood with me. Experiences that tell me that not only am I not over what happened with my Stake President, but I now question sustaining him as my Priesthood leader.

Because all wasn't well.

I know we are taught in recovery to not expect apologies, and not expect people to admit they are wrong. But I still wholeheartedly believe that what he did was completely wrong. And darn-it, I want an apology. And it bothers me to no end that it's been upwards of six months and he hasn't called me in to offer that apology. So it was in that moment that I saw him that I realized I am still very mad at him. Immature as that may be. That's where I am.

The second conflicting experienced occurred as I was sitting in the pew at the start of conference when the first counselor in the Stake Presidency was invited up to conduct the sustaining of Priesthood leaders. It was at this moment that I felt a surge of panic run though me. I knew I was going to be asked to sustain, or oppose, my Stake President. And for the first time in my entire life, I questioned my position on the matter.

So I thought about it, and decided that it would be okay to simply not raise my hand at all when his name was called. That way I was neither sustaining or opposing, and it would give me more time to really think about my position. But then they lumped the sustaining of the Stake President in with his counselors, and I felt bad, because I hold no issue with his counselors. So I sustained them all, even though I was not sure, and am still not sure.

Later that day I texted my bishop;


This is not a text question, we should meet.

And so I have an appointment with him in two days in which I plan to spill everything. I've given time the chance to heal me, and it just hasn't. And although I am scared that my bishop will blindly trust that what my Stake President said was inspired, simply because he holds keys, I'm no longer going to let that fear dictate my agency.

It is time that I healed from this. And I truly believe that meeting with my bishop is the next step I need to take in the process of surrender. For true surrender will release me from the shackles of expectation.
Labels: Expectation Priesthood Priesthood Keys Sustaining Trust