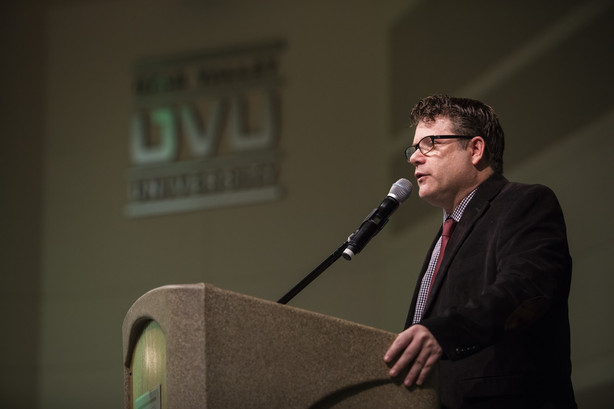 This past Friday I had the opportunity to attend the bi-annual Utah Valley University (UVU) Conference on Addiction. This year the keynote speaker was none other than Sean Astin... or Mikey, or Rudy or Special Agent Oso, or Samwise Gamgee, as well as a plethora of other characters he portrays.

Sean's presentation, or his narrative as he calls it, was nothing short of amazing. He was raw, thoughtful and funny. Mostly, he was vulnerable and real. He touched me on many different levels; invoking a wide spectrum of emotion, from laughter to compassion to empathy to tears.

But as much as he touched me, I think he touched the woman sitting next to me even more. His words managed to bring her a deep level of hope that she'd been lacking for upwards of two years.

The story began after I arrived at the conference, some 40 minutes early.
...after I carefully chose which table I was going to sit at.
...after I reserved my seat with my things.
...and after I saw Sean standing at the back of the stage and mustered up the courage to approach him for a hug and a selfie. (He gives the most excellent bear hugs by the way.)

Yes, after all that, I found myself back at my seat, alone, until a woman (whom I will call Jane) approached and asked if she could sit by me.

"Sure!" I responded, and as she sat I asked her what brought her to the conference. Her response was not quite what I expected, however, given the conference was full of therapists, clinicians and other addiction treatment personnel. "I don't know," she said. "I'm not sure why I'm here. This whole addiction thing, it's just really overwhelming." Although I didn't really understand. I smiled and agreed, because addiction really can be, and often is, mercilessly overwhelming.

A few minutes later, Jane's mom joined the table and quickly joined our conversation. It was then, during our pre-conference chitchat, that I learned that Jane's brother had died two years prior from a drug overdose. My heart grieved as the weight of Jane's loss sank in. Of course addiction felt hopelessly overwhelming to her, she had lost her brother to it. The grip of addiction was so strong that it literally stole him from her.

We sat quietly next to one another for the duration of Sean's presentation, until the end, when the miracle happened.

Sean referenced a scene in The Lord of the Rings: The Two Towers, where Sam and Frodo were alone in the ruins of Osgiliath, nestled in the shadow of the majestic city of Minas Tirith. It was there that they found themselves surrounded by the Nazgûl ringwraiths, flying atop their giant black felbeasts.

It was at that moment that Frodo really felt the full weight of his mission;
...to carry the One Ring to the depths of Mount Doom, the only place it could be destroyed.
It was there that he felt the deepest despair and the most devastating hopelessness.
...and it was there that the darkness of his burden nearly consumed him.

But then hope bloomed as one life touched another;

Sam:
“I know. It’s all wrong. By rights, we shouldn’t even be here. But we are. It’s like in the great stories, Mr. Frodo, the ones that really mattered. Full of darkness and danger they were. And sometimes you didn’t want to know the end because how could the end be happy? How could the world go back to the way it was when so much bad had happened? But in the end, it’s only a passing thing this shadow. Even darkness must pass. A new day will come. And when the sun shines, it will shine out the clearer. Those were the stories that stayed with you that meant something. Even if you were too small to understand why. But I think, Mr. Frodo, I do understand. I know now. Folk in those stories had lots of chances of turning back, only they didn’t. They kept going because they were holding on to something.”

Frodo:
“What are we holding on to, Sam?”

Sam:
“That there’s some good in this world, Mr. Frodo. And it’s worth fighting for.”

With tears glistening my eyes, I turned to Jane and said; "There's your hope." And with tears in her own eyes, she smiled, nodding in agreement.

Jane may not have understood why she was at that conference when she arrived, but we both knew why she was there by the time Sean concluded Sam's words.

My heart soared heavenward as I thanked Heavenly Father for touching one life, through the life of another, as He always does.

There truly is good in this world.
There is hope amongst the darkness of addiction.
And it is worth fighting for.