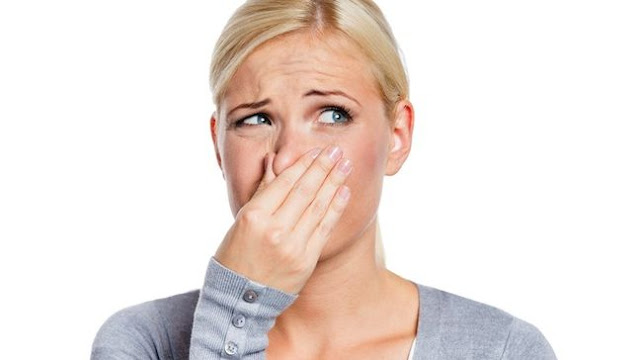 It was probably a week after my hospital stay. Things were settling in at home, baby was doing great and I was on the mend. Still, there was something that was bothering me. My body had developed quite the case of body odor, and I was devastatingly ashamed of it. Even though I showered multiple times a day and wore copious amounts of deodorant and body spray, nothing seemed to rid me of the stench.

And who wants to talk to anyone about such a thing? Even to my doctor, whom I trusted, I didn't want to say a word. Still, I had to, because I couldn't continue the way things were, and I knew that he was my best option for diagnosis and treatment.

So at my next appointment my doctor asked me how things were, leaving me fumbling over my words trying to tell him that something rather embarrassing was happening. He just looked me square in the face with an expression of 'I'm used to hearing crazy stuff' and said "just tell me."

So I did, in one long run-on sentence: "I have really bad B.O. and I don't know where it's coming from and I'm showering multiple times a day and wearing tons of deodorant and body spray and I smell really bad but I don't know what to do and it's really embarrassing."

He nodded and smiled and came out with a completely unexpected response:

He continued: "Your body has been through major trauma. You had two major surgeries within hours of each other, both of which you were opened completely up, giving ample opportunity for the invasion of bacteria. As your body kills off the bacteria, it gets excreted through your sweat glands, and that is what is causing the smell. It's all completely normal and will simply pass in time."

There is a reason.
It is normal.
It will pass.

There is power in this entire experience, and not just for medical reasons but for recovery reasons as well. Here I had this this ailment that I was completely ashamed of; so ashamed that I was really tempted to keep it a secret and not tell anyone, suffering in silence.

But I didn't. I was open and honest, and because of that courageous act, I gained the knowledge necessary to release me from the shame of the abnormality, I was given a timeline of healing and I was granted the tools to move forward.

I could not have asked for a more profound result.
Labels: courage Honesty secrecy Shame