The Spirit of Elijah

Prior to recovery I had no interest in Family History.  I remember my mom working diligently at it and getting excited at the smallest piece of information that would lead her to the next bread crumb.  She would often share her findings with me in hopes of lighting the fire within me, but it just never happened.

However, once I began recovery my heart began to soften to gospel principles that I once found boring or beyond me.

And then eventually the fire, the Spirit of Elijah, was within me lit...

I distinctly remember the very moment...

I had attended the first Saturday night session of Stake Conference I think I had ever attended.  President Miller (1st counselor in the Stake Presidency) delivered the most empowering talk on Family History.  In an instant I felt the most intense desire to find out more information about my ancestors.  He ended his talk with a challenge.  He challenged each Stake member to research five family names who were in need of ordinance work and take them to the Temple.

I'd recently had my Temple privileges restored so I was nervous, but excited to take on his challenge.  But as much as I wanted to complete the challenge I also wanted it to be easy.  I harbored fear from my mother's experiences with Family History, waiting months and months for films, or certificates to arrive in the mail.  I wanted it simple and streamlined.  Lucky for me, Family History research has progressed leaps and bounds since my early childhood.

I had three family lines to choose from.  My mom's line, which had already had quite a bit of work done on it, my step-dad's line whose extended family I felt no connection with, or my biological father's line who, as far as I knew, was completely untouched by Latter-day Saint Family History research.

I was born to Roger LeRoy Whiting and Irene Jean Williams in 1974.  They divorced a year later and 3 years after that my mom met my step-dad, Joseph Darrell Keller who eventually adopted me.  A year after that I was sealed to him.  Roger has kept in distant contact with me over the years but it was his mom, my Grandma Frankie, who truly never let go of me.  She was the best grandma I could ever ask for.

Given the fact that the Whiting line hadn't been researched and I already had a personal connection to them, I decided to start there.

Fortunately, when I was young my mom had a sound mind and sent my grandma Frankie a bunch of pedigree charts and asked her to fill them out.  Those pedigree charts proved to be the diving board I needed to catapult me into a giant sea of Family History.

I began plugging in the names off of the pedigree charts into new.familysearch.org and immediately ordinances began popping up as available.  After only a short week I had over 100 ordinances to perform for those on the Whiting line.  I was astounded, grateful and so humbled.

I spent the next six months working through those ordinances but the time eventually came when I began nearing the end of my stack of names, which meant, the real work was about to begin.

And when I say stuck, I mean stuck.  David Randall lived with his wife Harriet Elizabeth (Parker) in West Bloomfield, New York for almost 40 years.  David first appeared in West Bloomfield on the 1840 census.  But I couldn't find any information prior to that, where he came from, or anything.  There was rumor that his father's name was also David, but there was no substantiating evidence to support it.

Over time, as I continued to research, I found that a deep personal love began to develop within me for my ancestors, especially for David Randall.  Family Search wouldn't release his work and make his ordinances available for completion until I had birth information for him and I obviously didn't have that information without knowing where he came from.  A burning desire was lit within me to find him.  I felt as though I was only a couple of degrees of separation away from a major breakthrough, but I couldn't seem to find it on my own. 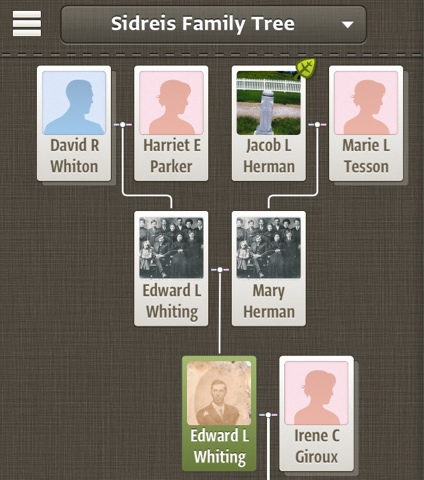 After much futile searching I awoke one morning and thought:


I need to go to the Temple and while in the Celestial room, ask for help with this research.


Why do you need to wait to be in the Temple to ask for help?

I immediately felt a wave of recognition wash over me.  I knew the Lord was right.  I didn't need to wait.  So I dropped to my knees right then and poured my heart out to the Lord:

Tears streamed my face as my head lifted and I knew I hadn't needed to ask Heavenly Father to tell them I was coming, because I felt them, I felt them right there in the room with me.  They heard my plea themselves.

The three days to follow were nothing short of major miracles and a living hell all wrapped up and tangled together.

My oldest son was an emotional wreck, having meltdown after meltdown.  I was triggering like crazy and didn't understand why, given all the good I was doing.  And the contention in our home was absolutely insane.  We were all anxious, frustrated and on edge with little to no patience with one another.

Yet, at the same time, new avenues were being opened up in regards to my investigative work.  I had reached out to someone regarding David Randall on findagrave.com, someone who lived in or near West Bloomfield, in hopes they could help.  They weren't able to, but someone else, a little old man named Charles, caught wind of the conversation and stepped in.

Charles also lived in the area of West Bloomfield and was busy spending his retired years fishing and taking pictures of Civil War veteran memorials.  After reading my plight on findagrave.com he reached out to me and offered to check some resources he had access to for more information on David Randall.  My angel, Charles, didn't stop there.  He emailed me multiple times per day with possible leads to discovering David Randall's heritage.  He told me (paraphrased):


I don't normally help people with research but this line has me really curious. Also, it's pouring rain right now, otherwise I'd be outside fishing or taking pictures.  So I'm sticking to electronic research for now.

I felt this overwhelming sense that the Lord had made it rain in New York at that time just so Charles would be willing to stay inside and help me research.  I know that sounds crazy, but that's truly the feeling I received.

On the morning of the 4th day I woke up from one of the most vivid and intense user dreams I have ever had.  It left me nauseous and feeling so consumed by darkness.  I laid in bed for a moment before I began rolling off the bed to crash to my knees.  My intention was to cry out "why!?" to the Lord.  "Why all this turmoil and madness these past few days!?"  But before my knees even hit the floor the Lord answered me loud and clear with the piercing words:


It's because of the Family History!

The revelation immediately dispelled the fog of despair I was feeling.  Understanding the reason behind the adversary's attack only fueled my desire to fight to stay on the straight and narrow.  I left for work that day with new resolve.  And I knew; I knew that huge miracles were coming.

That same day, about an hour after arriving at work, I received my 12th email from Charles, containing only a picture.

Notice the names of the children.... 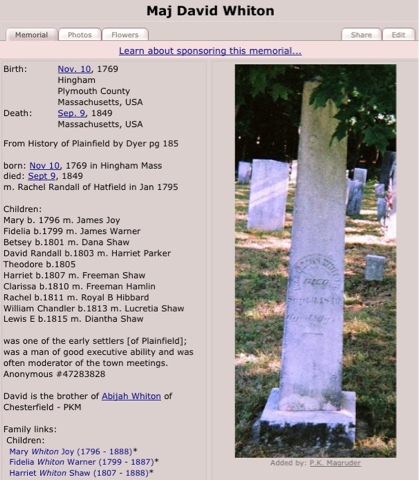 And then they were found.

For some reason, David Randall decided to change his last name from Whiton to Whiting.  I have no record of him as a Whiton so I'm not sure exactly when the change happened, but definitely prior to him showing up on the 1840 census when he was 37.

Upon receiving the above information I immediately plugged David Whiton (David Randall's father) into ancestry.com to see if any information would populate.  I was in shock to find that all of his information had already been entered, as well as his entire ancestry dating back to 1635 when my 13th great grand father, Thomas Whiton, docked in Boston harbor having arrived from England.  I tapped into a family of rich, noble, brave and courageous ancestry.  Between many of my ancestors, all of the early wars are represented: The Revolutionary War, King Phillips War, The War of 1812 and the Civil War.

But the most important find of all came when I plugged in David Randall's parent's information into new.familysearch.com and I saw the beautiful little green arrow that told me I could now do his and Harriet's work.  They could be cleansed from all the woes of their life, they could make the necessary covenants with the Lord to ensure their own salvation, they could covenant with one another and the Lord to be an eternal family forever and also have each of their children sealed to them.

They had true happiness on the horizon...

I didn't waste any time.  I took them to the Temple right away.  I have felt his presence near me often since that day.  I feel my great great great grand father, David Randall Whiton/Whiting, is one of my most stalwart guardian angels.  I feel honored that he would minister to me and honestly, it makes me want to be better each day so that his service to me isn't in vain.

I love you my dear Grandpapa.  I cannot wait to see you again.


God be with you till then...
Labels: Angels Family History Miracles Prayer Tender Mercies