A Few Random Things About Me

So I found this pretty cool blog at random.  It's called Conversion Diary and details Jennifer's journey of conversion from atheism to Christianity.  I absolutely love reading about other people, about their lives, their struggles and especially their triumphs.  Their faith and courage surely inspires and nurtures my own faith and courage.

On Jennifer's blog was a post called A Few Odd Things About Me... and is meant to be sort of a 'get to know you' feature.  But not just get to know you about dumb stuff... like 'what's your favorite color' (I'm seriously sure no one cares what my favorite color is. and it probably changes as fast as my mood anyway) but seriously crazy random stuff.

I think this is such a fun idea and hope my fellow bloggers will also join in the fun!

My Mother was born in Glasgow, Scotland but at around 10 years old migrated to New Zealand with her parents and two older brothers, Duncan and Alistair.  My mom eventually moved to the States but most of her family remained in New Zealand. When I was 11 I had the opportunity to take a trip with my mom and three younger siblings back to New Zealand and spend a summer there.  It was magnificent!  We lived right on Brighton Beach in Christchurch:

I'd walk across the street, over some sand dunes and into the presence of this magnificent view.
(If I had this to escape to everyday I wouldn't be an addict:-)

Another memory I have is of this small wading pool up the street from my Grandparents house.  I would find myself swimming at this pool practically every single day.

Yes, that is the ocean in the background. 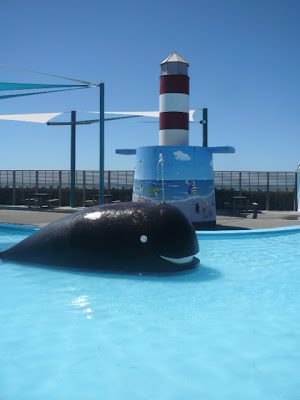 I had many opportunities while I was there that I haven't had since and I'm not sure I'll ever have again.  I climbed two glaciers while I was there, Franz Josef and Fox.  I also took a week long hike through 'the bush.'  We were met with swing bridges, creeks, rivers and a cabin at the end of each day...

My mom, uncle Duncan, cousin Vanessa and friend Brian - on the 1 week hike through the 'bush'

The three months I spent there will be branded into my memory forever.  I hope to return there one day.  To me, New Zealand is truly God's country.  It is absolutely gorgeous there.  Neatly tucked away in the corner of the earth, untainted by war and ruin.

When Brayden, my oldest son, was 2, Tim and I decided to try and get pregnant again.  We were having trouble and so my doctor put me on a fertility drug to force me to ovulate.  After many mornings of temperature taking I finally had a positive pregnancy test.  We were so excited!  The following 16 weeks went by without event, minus the horrendous morning sickness that plagued me.

Then the unthinkable happened.  On the way to driving Tim to work one day, with Brayden in the backseat, I sneezed.  And when I sneezed I felt a rush of fluid.  I went into complete panic mode thinking I was bleeding but soon determined that it was clear fluid.  We detoured straight to the doctors office who confirmed my fears.  My water had broken.

The doctor sent me home on bed rest and on day 3 my sweet baby boy was born in a trash bag over the toilet in my bathroom.

I went through a really hard time with this loss.  So many emotions ran through me.  Hate, anger, sadness, rage, resentment, frustration, confusion, anxiety, worry, fear... all of it.

After about a month the fog began to lift.  We named our sweet angel baby soon after.  I felt it was important to give him a name... and solidify in our minds that even though Heavenly Father took him back home, he is still a part of our family.  We talk about Sean all the time now.  We even have video of him on the sonogram taken of him when I was around 14 weeks pregnant with him.  We love him and are truly blessed and honored to have such a valiant Spirit in our family.  We can't wait to see him again in Heaven.

We All have one... I hope(??).  A picture that we would die if anyone saw.  Well I'm going to show you mine.  This was girls camp in Montana in 1992.  I can't believe I'm posting this, but I'm sort of proud of its level of ugliness.. and I definitely feel triumphant with my level of vulnerability in showing it.

The Lord has blessed me with an extra vertebra in the thoracic region of my spine.  Instead of 12 vertebra in that region, I actually have 13.  Weird right?  It happens in around 4% of the population.  I wonder what Darwin would say about that!

Yes, I have a tattoo.  It's funny because I forget I have it half the time until I see it in the mirror every now and then and it's like "oh ya."  Am I proud of it?  No.  If I had it to do it over again would I still get it?  No, because we have been counseled not to.  Am I ashamed of it or do I feel unworthy because of it?  Absolutely not.  Although, a couple of years back my then 7 year old caught glimpse of it (it's on my stomach) and gasped:

HAH!  I just laughed.  Of course Jesus isn't mad at me but, I'm glad he takes disobedience so seriously.

And NO - you guys don't get a picture.  It looked nice at one point but it has endured three full term babies and is not pleasing to the eyes at this point.

So there you have it.  Five completely random things about me that the average person doesn't know.  :-)
Labels: Me Random